Scars occurring after injuries or surgeries make nobody happy. They develop through skin disruption and its imperfect healing. Stretch marks are specific type of scars, caused by the breaking of elastic fibres underneath the skin’s surface as the skin is stretched to the extreme. Same as the brownish spots of unwanted pigmentation, such skin problems make our appearance less aesthetical. Thanks to the medical lasers, however, we don’t have to be worried about that anymore.

What kind of lasers should I chose?

Fractional non-ablative laser Palomar® efficiently corrects various problems of the skin relief (such as scars or stretch marks). It can stimulate elastin fibres in the skin without causing any disruptions on it, which then corrects the scar/stretch mark and evens the skin relief out. The treatment is very fast, there is no pain and no recovery time needed afterwards. The younger stretch marks are the better and faster they can be solved, therefore it is highly recommended to find a physician as soon as they appear.

Older or deeper scars can be treated, too. Mostly, such treatment is performed by the CO2 resurfacing laser which – apart from stretch mark correction – also achieves great results in removing freckles, skin excrescences of any kind, moles, fibromas, warts or acne scars. For stretch mark removal it is frequently combined with Palomar® laser in order to achieve the best possible results.

Laser treatments are considered the most efficient solutions for the removal of unwanted pigmentation. Whether it is done by a fractional ablative Candela CO2 laser, vascular V-Beam® Perfecta laser or by their combination, the complete removal of pigment spots or larger pigmentation areas is possible.

CO2 resurfacing laser renews the surface layer of the skin completely. The current one with the pigment problem is replaced by a brand new layer without pigmentation in a matter of days. Apart from unwanted pigmentation, this laser can also efficiently remove freckles, skin excrescences of any kind, moles, fibromas or warts. It is also great for acne scars removal.

Vascular V-Beam® Perfecta laser, on the other hand, doesn’t disrupt the skin anyhow. It can treat pigment, sun and age (liver) spots as well as it is great for treating acne.

Which areas can I get treated?

Basically any area of the body can be treated by medical lasers.  Stretch marks commonly appear during pregnancy or after significant weight gain and are more likely to appear on the belly, buttocks and thighs in women while in men, they usually appear all over the arms or the chest if they do weight lifting. Increased pigmentation usually appears on the neck, décolleté or hands.

The effect of laser treatment

All laser corrections of unwanted aesthetical problems of the skin are ambulatory. They are mostly performed in topical anaesthesia (although not always) and they are usually done in a matter of minutes. There is no special regime needed afterwards (apart from limited sun exposure) as well as no recovery time. The skin is normalised within few days after the treatment and the full effect develops in a matter of three weeks.

If you’re not familiar with various laser types, you really don’t have to be. A professional can always tell you which one is suitable to help you with your condition. Generally speaking, there are ablative and non-ablative lasers. Non-ablative lasers (such as Palomar®) treat the skin without disrupting it. Such lasers heat the skin up to stimulate it to bigger collagen production, which means the skin becomes more elastic and tight (for example during laser peeling).

The exact opposite of non-ablative laser is obviously ablative laser. This type of laser disrupts top skin layer and causes its complete renewal at the same time. Probably, the most well-known ablative laser is Candela CO2 resurfacing laser which achieves great results in skin rejuvenation and removing freckles, skin excrescences of any kind, moles, fibromas or warts. 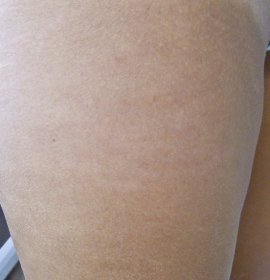 Hello, I’m very troubled by stretch marks on my buttocks. Is it possible to remove them?

Of course it is. Palomar® is a fractional non-ablative laser which efficiently corrects various problems of the skin relief without causing any disruptions on it. It can stimulate elastin fibres in the skin, which makes it feel firmer and more elastic and also look fresher and healthier. Through this process the laser can very nicely correct stretch marks, scars or any other unwanted structures on the surface of the skin. There is no pain and no recovery time needed.

Good day, how does the Palomar laser work?

Since my childhood I have been troubled by a deep scar on my leg. Is there a way how to make it at least less visible?

Older or deeper scars can be treated by the CO2 resurfacing laser. It renews the surface layer of the skin completely. The current one with the scar problem is replaced by a brand new layer in a matter of days. The older the scar is, the more complex the treatment needs to be, therefore it is possible the doctor will recommend a combination treatment or several repetitions.

As soon as we pass the age 25, we may begin to notice that our skin is slowly wilting. As always,…

If you want to give the skin a youthful and delicate texture, one of the solutions is treatment by…

Are you frowning often? Do you simply like to laugh? If so, mimic wrinkles are no news to you. They…