Are you worried by a slightly bigger belly or thighs and no diet is working for you? Relax. Zeltiq CoolSculpting® treatment can easily deal with locally stored fat and relieve you from it forever. It is the only original, patented and scientifically tested cryolipolysis. And do you know what’s best about it? It is completely non-invasive, painless, safe and most of all – highly effective.

What is Zeltiq CoolSculpting®?

Zeltiq CoolSculpting® device was invented by foremost scientists from the famous Harvard University in the US. After its certification by the Food and Drug Administration (FDA) and after receiving the European CE certificate, it has quickly spread all across the world. It is an ambulatory body shaping method which targets problematic areas that no diet or exercising can manage and freezes the fat cells within them. Its greatest advantage is the speed and easiness – the treatment only takes an hour, it is painless and there is no recovery time needed afterwards. Right after the treatment you can go back to work or your social life, you will feel no different.

The treatment only targets fat; it doesn’t affect any other tissues, organs or nerves. Moreover, the patient is protected from frostbites or any other danger by a special gel pad and by the smart setting of the Zeltiq CoolSculpting® device. Since its introduction to the world market, more than a million treatments have been performed and not a single incident has been recorded.

Which areas can I have treated?

This treatment can be performed basically in any area of the body – from the belly, the hips and the thighs, to the bottom – with a single limitation: the treated area has to be suitable for application in both its size and its amount of subcutaneous fat. The device is not even able to start operating in areas without the necessary fat layer, which makes this treatment very safe.

The effect of Zeltiq CoolSculpting®

Frozen fat cells slowly die out and are discharged off your body through your lymphatic system within three months. Why does it take so long, you may ask? If the cell’s disintegration and elimination process occurred at a faster pace, it would tire the organism. Three months are ideal for smooth transaction of reducing fats.

What to be cautious about?

Cryolipolysis is a very popular treatment, therefore a great number of alternatives to the original Zeltiq CoolSculpting® device have emerged all over the world. While undergoing these treatments, be aware that they mostly aren’t scientifically tested or approved by the relevant authorities and that their efficiency as well as their safety are questionable. Always pay a great deal of attention to finding out whether the procedure you’re about to undergo is legitimate. Find out about the facility that provides it, find out whether the treatment is performed by a doctor and find out whether it really is the original Zeltiq CoolSculpting® device that was originally brought to the Czech Republic by Mediestetik clinic. Generally speaking: If it isn’t CoolSculpting®, it isn’t cryolipolysis. 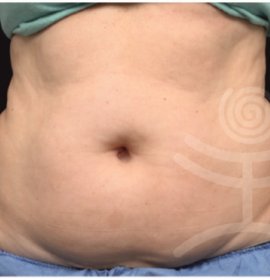 Hello. Is one procedure enough or do I have to repeat it?

Hello, I have a question. Is the procedure suitable for a 63 year old woman?

This treatment is suitable for anyone older than 18.

Hello, I’d like to book for this procedure. I want to lose some weight from my belly and thighs. Is this procedure suitable for me?

Yes, the Zeltiq Coolsculpting treatment can be performed in the areas of your interest. It also depends on the actual state of your fat layer in the area. The doctor will gladly give you more information during a personal consultation and examination.

Is there any limitation after the procedure?

Not at all. Just stay away from saunas for a bit and do not perform sports or drink alcohol on the day of the treatment.

As we grow old, our skin withers and sags, not just in the face but also all around our body. The…

Wrinkles or sagging skin is a problem for many of us, although thanks to modern aesthetic medicine…

Have you ever noticed that your face loses volume as the years go by? It’s caused by the decrease…